We can procrastinate rebooting at times in this world of “overly busy” and not wanting to waste 5 or 15 seconds. When I had first looked at this question my boot times had gone from 45 seconds to 14 seconds with an SSD and systemd tweaking.

Recently I acquired a “modern” laptop with a NVMe M.2 Gen 3.0 x 4 SSD with blazing 3.4 GB/s Windows read speed and 2 GB/s Linux read speed. So it should be faster right? Um… no. It’s painfully slower:

This time is actually after tweaking. It was much worse 80 seconds because nVidia and Dell choose to cut power to HDMI audio on nVidia GTX970M graphics card which drives the HDMI port. As such a setpci command was required which caused “low grapics error” message and you had to wait 20 seconds for mouse pointer to proceed. Then it would reload all graphic drivers and restart lightdm.

Another problem with the “modern” laptop is BIOS POST was taking 15 seconds. Tweaks in BIOS to turn off hardware error checking, turn off loading boot drivers for NICs and other tweaks I can’t remember just now changed BIOS POST time to 6 seconds. By comparison the “old” laptop BIOS POST time was only a couple of seconds using Legacy BIOS CSM and no BIOS tweaking.

The Ubuntu RapidReboot project mention in ByteCommander’s post is from 2010. The project’s rationale is summed up thusly:

There are a few cases where we can safely assume the user does not
want to see the boot loader; in these cases, we should use kexec to
avoid long reboots, BIOS POSTs, and boot loader time. This can take 10
seconds in optimal situations; but with SCSI or RAID BIOS and network
boot roms, the time can climb to 20, 30, or even over 60 seconds, even
in cases where the time between loading the kernel and seeing the
log-in screen is 30-60 seconds.

kexec is the magic spell we cast to reboot without BIOS post and some other low level discovery mechanisms such as RAID setup.

Kernel must be compiled with CONFIG_KEXEC flag

The first step is to ensure your kernel was compiled with the CONFIG_KEXEC=y option:

The first command uname -r is optional just to show what kernel you’ve booted with. As we can see on the second command the kernel is compiled by Ubuntu team with the necessary flag set. Not sure when this was added but likely <= year 2012.

The next step is to install the kexec tools for user space:

After normal binary downloads you are greeted with this screen: 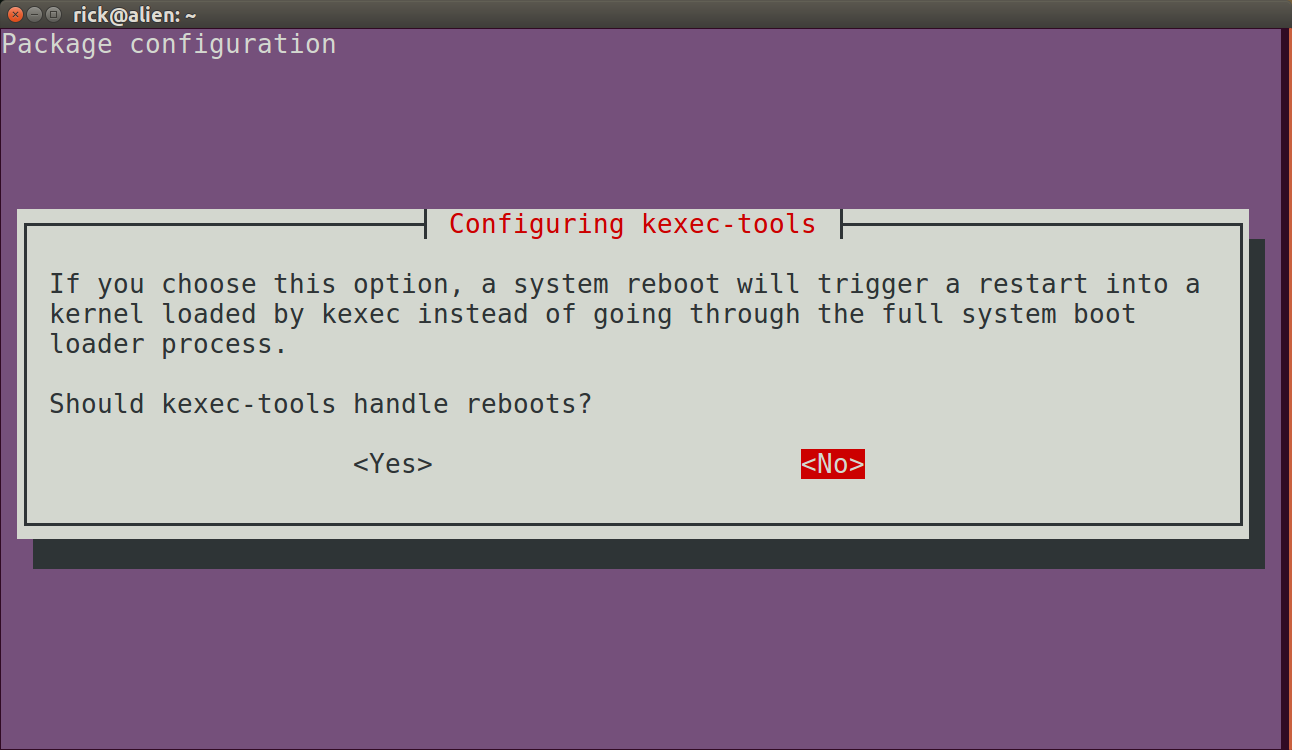 I answered No in part because of this bug report that the option is not relevant in systemd.

Then the installation continues (snippet shown below):

Our cohorts at ArchLinux have great documentation for kexec but it needs massaging for Ubuntu / Debian distributions.

Basic usage are with two commands:

from this point forward it appears every time you click reboot it automatically reloads the last kernel in fast reboot mode.

Then enable the service file for the kernel you want to load, for example to simply set the current kernel uname -r:

If you have youtube running there might be a system inhibitor preventing you from rebooting in which case use:

If you wish to load a different kernel for the next kexec, for example 4.12.2-041202-generic, disable the service for the current kernel and enable the one for the new kernel:

I have to post this answer now as it’s time to boot, fix, boot, fix, repeat. I have a complicated setup where systemd loads five nVidia drivers which I have to unload, run setpci to power on audio to hdmi, reload nVidia drivers and restart lightdm. It might take awhile to work out.